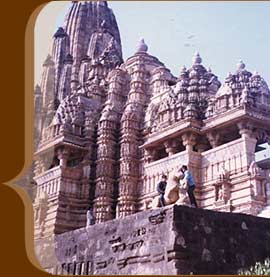 The temples of Khajuraho are undoubtedly masterpieces and a great work of art. But they are not the only attractions around Khajuraho. There are other attractions around that should also not be missed. The Panna National Park, 40 km from Khajuraho, is home to a variety of wildlife. The Dhubela Museum (57 km), on the Jhansi-Khajuraho road, houses the weapons, paintings, and sculptures of the Bundela kings as well as a wide variety of sculptures of the Shakti cult. Located on the Ken River, the Pandav Falls (30 km) is a major attraction in the vicinity of Khajuraho. The Raigarh Palace situated at the foot of Maniyagarh hills has now been converted into a heritage hotel. Bandhavgarh (237 km) is a wildlife sanctuary situated in the heart of the Vindhya Mountain range. The Ajaygarh Fort (80 km) was the erstwhile capital of the Chandelas in their declining years.

Panna National Park
Panna National Park, a mere 30-minute drive away from Khajuraho is a magnificent one. Deep gorges, tranquil valley and dense teak forests combined with the rich flora and fauna make a visit to the Park a memorable one. The jungle today is a home to the variety of species of wildlife such as the Leopard, Wolf and Gharial. The Wild Boar, the Sloth Bear, the Cheetal, the Chowsingha, the Indian Fox, the Porcupine, and a host of lesser fauna are also seen. The park is closed from June to October because of the hot summers.

Dhubela Museum
57 kms. on the Jhansi-Kajuhrao road is located an old fort which houses a rare collection of artifacts depicting the heritage of Bundelkhand. This museum houses a wide variety of Shakti Cult sculptures and other sections on garments, weapons and paintings.

Rajgarh Palace
At the foot of Maniyagarh hills is Rajgarh Palace. This palace is around 50 years old and 25 km away from Khajuraho.

Ajaygarh Fort
At a distance of 80 km is the Ajaygarh Fort, once the capital of Chandelas in their declining years. It is built at a height of 688 m. Another fort is Kalinjar, located on the Vindhya Range at a distance of 100 km. It was built during Gupta period and captured by Shri Yashovarman, the Chandela king, in the 10th century

Benisagar and Ranguan Lake
Both are ideal picnic spots suitable for boating. They are 11 kms. and 25 kms. from Khajuraho respectively.

Raneh Falls
20 kms. from Khajurao, on the Ken river are the famous rock formations. The main attraction is the 5 kms. long, 100 feet deep canyon made of pure crystalline granite in varying shades of colour ranging from pink and red to grey. A series of seasonal waterfalls surrounded by jungle makes it an ideal picnic spot.

Ken Gharial Sanctuary
This is a natural home of the long-snouted variety of crocodiles, 24 kms. from the temples.